As well as using your mouse to operate software, you can also use your keyboard to perform specific functions. This page provides a list of keyboard shortcuts which you may find useful.

How to use a keyboard shortcut

Traditionally, keyboard shortcuts are written like so: Alt + F1. This means that you should press the Alt and F1 keys simultaneously. This is normally best achieved by holding down the modifier key (such as Ctrl or Alt or the Super(windows logo) key) and then pressing the second key once. You can then release the modifier key.

To find (and change) system-level keyboard shortcuts, one can (at least in later, GNOME-based distros, e.g. ubuntu karmic) run the Keyboard Shortcuts applet, e.g. via System>Preferences>Keyboard Shortcuts on the main menu. 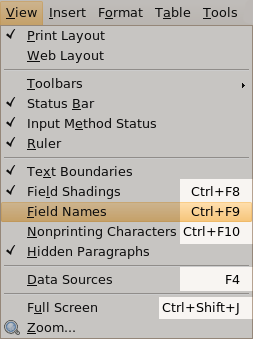 This section lists common keyboard shortcuts which you can use to operate parts of the desktop (such as windows and the menu bar).

These might not work on every machine, but are reasonably common:

These might change depending on the application you’re using, but work for most common applications:

All of the shortcuts listed in this section require Desktop Effects to be enabled.

These shortcuts do not apply in all applications, but usually perform the functions listed below.

Some of these shortcuts will restart important parts of your system. Only use them if you have to.

This section covers common keyboard shortcuts for some important applications which are installed by default in Ubuntu.

Rotate through each tab

Rotate backwards through each tab

Close the current tab (or browser if on last tab)

Enter a new web search in the search bar

These might not work for everyone, but can help with accessibility issues:

If you don’t have Alt Gr, it might be labelled something else. It’s usually to the right of the space bar.

Many laptops have function (Fn) keys which you can hold down to access more functions on the laptop’s keyboard. A list of these functions should be available from the manufacturer of the laptop.

If you want to have quick access to lines of text by using a hotkey, for example to enter your email address in forms, then you can use xbindkeys. Xbindkeys has a GUI utility to allow easy settings of hotkeys, but be aware that it’s a little more complicated than the default Ubuntu Shortcutkeys interface.

Now the utility that actually does the “typing”

Once each is installed, start both applications by bringing up “Run Application” with ALT -F2.

To keep the xbindkeys hotkeys active when you next start the computer you will have to add a new session, System –> Preferences –> Sessions. Put in the command “xbindkeys” into the command field (without the quotes).

You should be able to see the “Xbindkeys Config” window. Start a new hotkey. Hit “New” on the bottom row of buttons. Then use the edit area at the top right. Give the hotkey a name. Hit the “GetKey” button to set the keypress for a hotkey. Some hotkeys may conflict with other hotkeys on the system (a window will open or a compiz plugin will activate). If this happens then choose another combination like CTRL – ALT – F for example.

Now put the command to activate with that hotkey in the “Action” field. This can be anything, but to allow for the entry of a line of text into part of the GUI enter

The example shows an email address but it can be any line of text. Now hit “Apply” and test the hotkey in a Firefox field, text editor, or anywhere that text can be entered. Please note that using “Run Action” will not be able to test the command in xbindkeys-config, you will have to test it somewhere else.

Replacing keys with other keys

If you want to use xbindkeys to override certain keys on your keyboard, you can catch them with xbindkeys, and then emit new keypresses using xmacro. To install xmacro, use:

After this, you can find out the commands for specific keypresses by starting xmacrorec:

First give it the key which will allow you to quit the app, then press the keys you want to know the codes for. After this, you can use those codes in the commands you tell xbindkeys to run, for example:

will simulate a key press of the PageDown key. Thus, in my .xbindkeysrc the following contents

Posted by anisoft on May 11, 2014 in Ubuntu Shortcuts, Uncategorized

The Code is True or False

The Art and Craft of Blogging

The latest news on WordPress.com and the WordPress community.